We are expert to sample, transform, evaluate and analyse your data.

We estimate the multifactorial densities of your systems.

We search for patterns, segments or clusters.

We make complex sampling and straightening.

We manage the design of your experiments, the quality of the processus, the performance analisys, customers satisfaction, service quality evaluation, Six Sigma and Lean Solutions .

We made Correspondence and Components Analisys on any kind of data.

We study saisonality and tendancy of your TimeSeries. we make complex sampling of your data including strata and quotas.

We analyse your geostatistical data to determine effects and correlations.

We make the automation of your data analyse and results on any platform or statistical software.

We optimize the data transformation and calculation for memory and time reduction.

We make Massive and Parallel computations.

Our work on data modelling target the best tools and methods usable for your need.

Different models are used. We use multiple and complex regression for your data. It includes Ridge, Lasso or PLS models.

We can make complex Statistical model applicable to your data.

We take into the saisonality of your timeseries durint the modelisation process.

The spatial regression model is used to resolve geolocalized data. This kind of model is applicable to different geographical application as health or marketing.

We manage your longitudinales data in following and modelling cohorts and panels.

We model complex data structure with indirect or latent variables.

We make complex model to classify your data including Logistic Regression and Discriminant Analisys.

For complex modelling we use the Support Vector Machine.

We support unsupervised methods as Kononen Map or associations rules.

We work on Text Mining, Streaming , Graph and Social Networks.

Choose the type of capacitor that has the longest life. · Estimate the average service life of the mounting surface capacitor under normal operating conditions:

Evaluation method of the average life of the capacitor mounting surface.

To estimate this average lifetime of the surface-mount capacitor, a specific method of acceleration of lifetime is set up. Indeed the capacitors have a life of several years, making their tests very long. Generally the acceleration of the life tests are done by accelerating the failure of the product by the addition of sustained stress.

As part of this study, two non-controllable parameters are used: temperature and voltage. By stressing these two parameters, the life of the capacitor will be much less with reasonable failure times, and will allow an estimate of the service life under average conditions of use.

The value measured in these tests is the MTTF (Mean Time To Failure) which represents the average time of failure.

Description of the model and the parameters of the study

The parameters of the study are:

The mathematical model for the factors of production is the following one taking into account only the links of the second order for the factors A and B: We use the Taguchi method where we minimize the dispersion of product performance in response to noise factors while maximizing dispersion in response to signal factors. S / B ratios can be calculated using Taguchi’s robust plan options. There are three ratios:

Full L8 Factorial Experiment Plan for Environmental Factors: We begin by changing the Tension factor to 4 levels by two factors at two levels:

The final experience plan is:

Analysis of the reliability of the factors of production

Experience results for factors of production We take into account the average life span per group of factors, without considering the environmental factors directly.

Analysis of the variance

To verify the conditions necessary for an analysis of variance, we must check the independence of the samples, the normality of the distribution and the homogeneity of the variances.

To test the normality of the distribution, we use a Shapiro-Wilk test. Statistic : 0.984044, Probability: 0,900591 . The probability of the test performed is greater than 5%, we can not reject the idea that the service life follows a normal distribution at the 95% level of confidence. The normality graph confirms the Gaussian distribution. 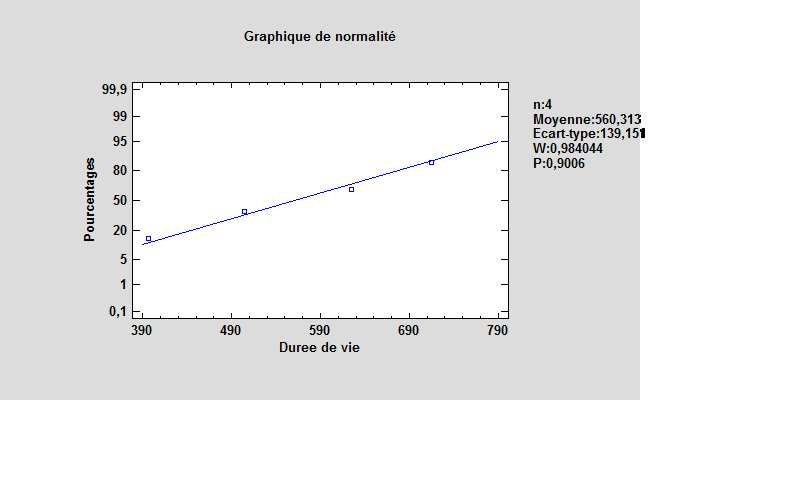 The plot of residuals by number of observations makes it possible to highlight the independence of the samples. 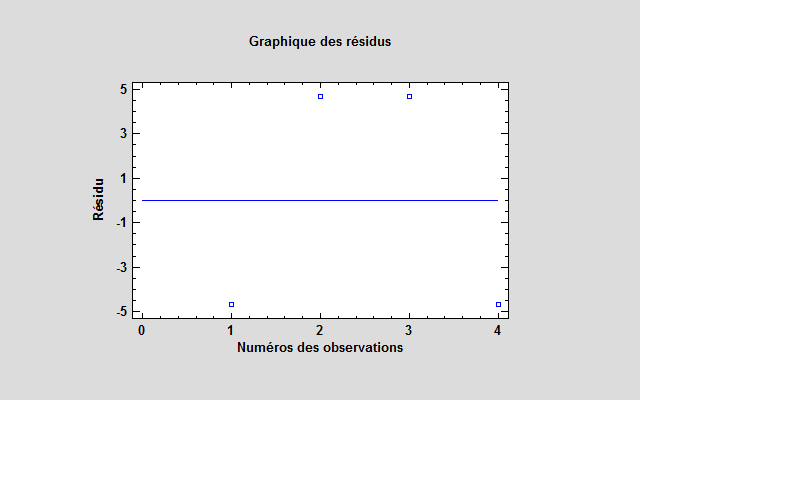 The plot of Residues by Production Temperature and Dielectric allows to conclude a homogeneous variance. The two graphs show residual variances of the same level. 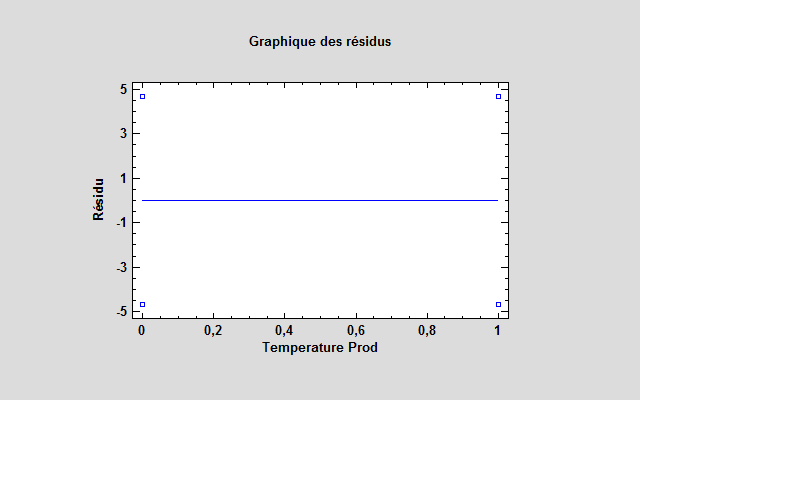 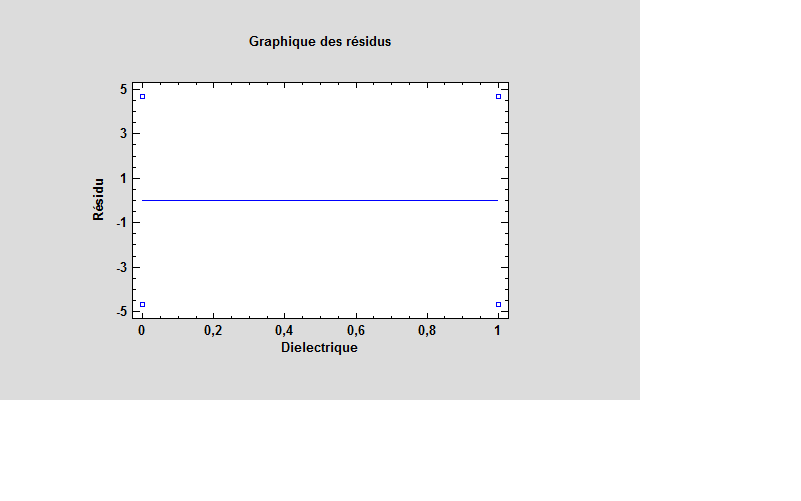 Analysis of the ANOVA 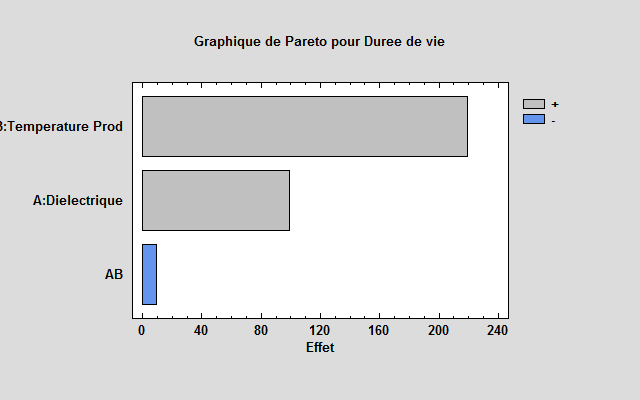 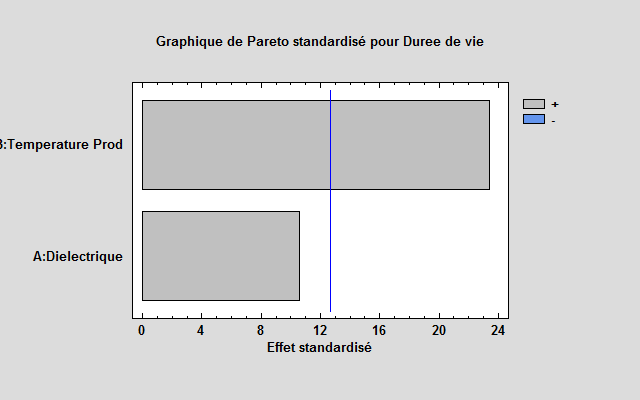 By eliminating the AB interaction, we can evaluate the quality of each factor in the model. The results are as follows:

The effect of the production temperature has a probability of less than 5% which indicates that it is significantly different from zero and has a decisive effect at the 95% confidence level. 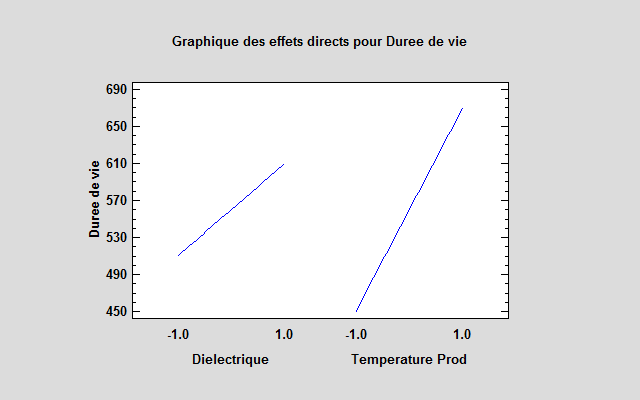 We choose « the greatest the best » and the target value: · For one hand to know the best combination acting on the service life. · And on the other hand, identify combinations that offer greater resistance to environmental factors. 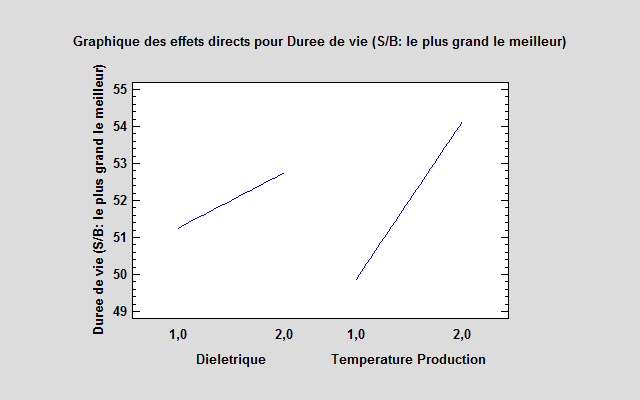 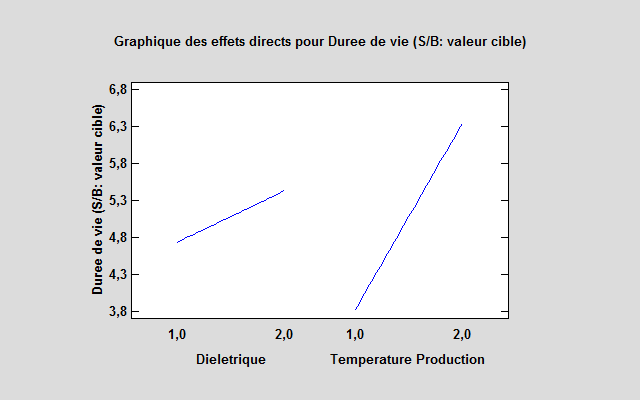 The analysis of the values ​​and graphs of the effects makes it possible to choose the best combination respecting the instructions of robustness. Thus, the choice of the type 2 production temperature and the type 2 dielectric appears again as the best compromise. 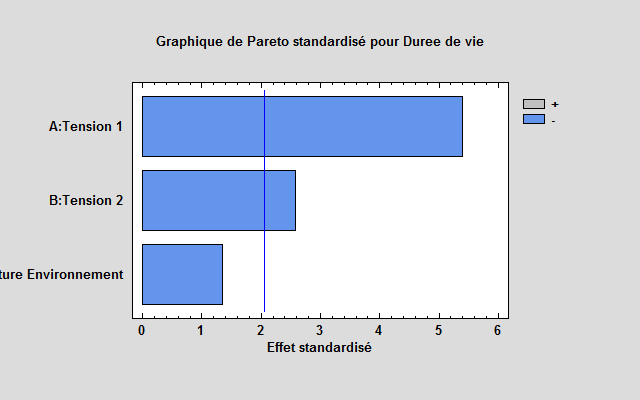 { » « } Voltage has a preponderant effect on the effect of noise in our model. The temperature factor of the environment is negligible in view of the Pareto graph. This is confirmed by the effects graph. The following variance analysis can also be checked:

The data used is taken from the previous choice which is the Dielectric factor at Level 2 and the Production temperature factor at level 2. 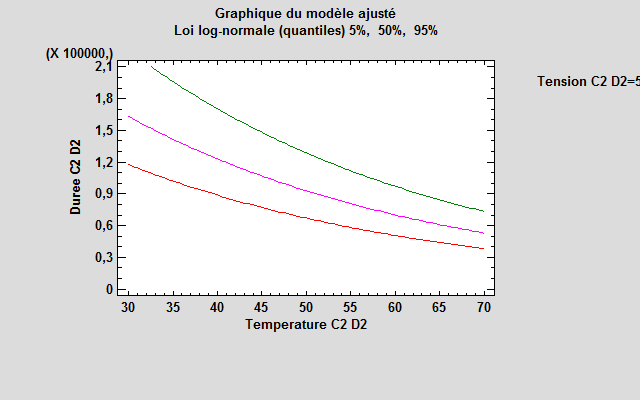