We will streamline your data management while automatically updating your website, mobile application with new analytics and Game Schedule in realtime.

We have huge implementation experience on different software solution at every level.

Our approach is iterative, we deliver just the solution needed to target all our energy in the quality of our work.

One of the expanding areas necessitating good predictive accuracy is sport prediction, due to the large monetary amounts involved in betting. Club managers and owners are striving for classification models so that they can understand and formulate strategies needed to win matches. These models are based on numerous factors involved in the games, such as the results of historical matches, player performance indicators, and opposition information.

With easy-to-understand visualization, we offers compact summary of the game, players performance and tactics. We are to enable coaches to analyze physical/technical/tactical performances of the players/teams/game all before the sweat goes dry.

We don’t need to explain what is this extraordinary Rugby championship. In this study, we cover matchs and players data from 2014 to 2016. This use case corresponds to a global view of rugby analytics. It doesn’t cover training or medical analytics that is day to day life of a team. Our experience can be mixed to more particular information and cover more analytics. The goals it to show analytics use case. From simple view as characteristics of players or to predict performance.

Use case : Compare your Players characteristics

There are more than 1000 players identified in the Super Rugby union. This data is composed by beginner or experienced players. It represent more than 100 competition matches. The presentation of the players is statically compared. It is strange in first approach . But we should consider that each player are different and have their speciality. It is exactly what the following map represent.

We have selected a short list of player to have the capability to see clearly the names of the players. In extracting these informations, we categorize the style of players in three area. The first area corresponds to run, scrums and mauls. It is on the right part of the map. The players on thhis area has a capability oriented on forward roles. The player named Keven Mealamu, Allblack and one of the best hooker in New Zealand, is one of the best to make runs, mauls or scrums. It is exactly what we need for a Hooker. The map appears more clear. The second Area corresponds to the Passes, Possessions and Turnovers. Clearly, it describes players who are playing quickly in the field. If we look the player named Sosene Anesi , we can extrapolate his capacity regarding his role in the game. He is a Wing or a Fullback. He is completely corresponding by this kind of players that need free playing area to avance. The third area describes players that have the capacity to make Kick, Goals and Drop. These players win by their foot. Kick is one of the aspect of a rugby game. It is why this specialities is not open to all. 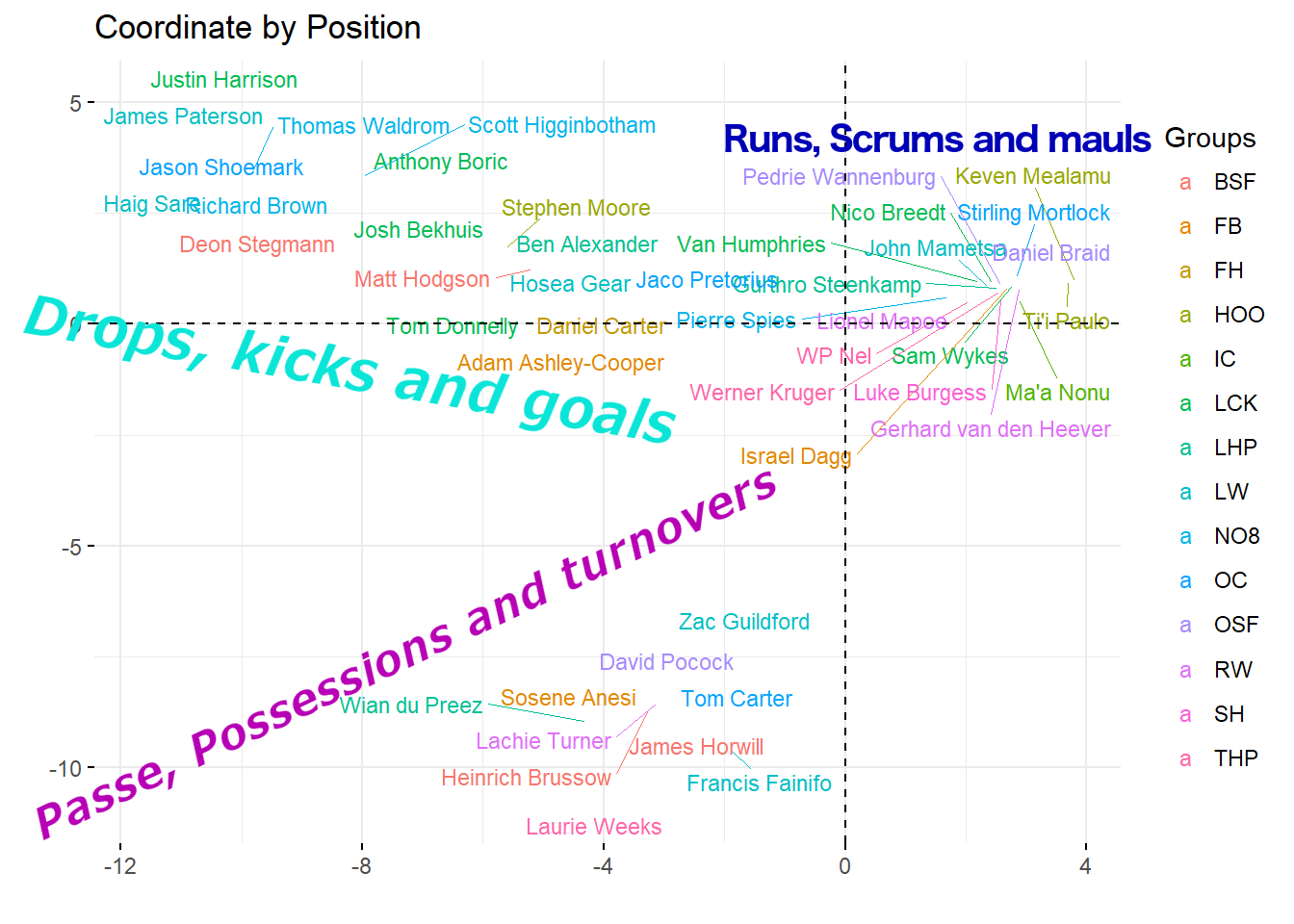 This map is based on the same orientation offered by the previous screen. By example Israel Dagg make more run than Adam Ashley Copper. This two platers have their proper game style. When Israel Dagg brave other player, Ashley Copper should select to make a long kick above the defence.

The subject of team selection is more than a simple analysis. The impact of a player or a group of player needs a modelisation of a match. In this use case, we have selected the Super Rugby match of : Hurricanes agains Sharks in 2015. In this match, Hurricanes wins 32 – 24. The team of Hurricanes is important. A lot of great players plays in this team. hurricanes comes from Wellington in New Zealand. The Sharks comes from Durban in South Africa. We made a simulation based on different match to construct a complex model. This model has given a score for this match relatively close to the final result. Hurricanes Sharks

Th objective of this sue case is to change the sharks team to win the match. In selecting the best player of certain position, we should obtain a better score for the sharks. The sharks was based on this team composition:

After some research in the Championship, we get the best players at certain position. We select a least one player by line. The new Sharks team should be based on this team composition:

This composition is not realistic.But it permits to analyse what should be the team to change the score efficiently. We can compare each team to see the difference between Huriccanes,Sharks and new Sharks. By evidence , Sharks an Hurricanes have different style game. Hurricanes have a game more based on Possession and Runs. Where Sharks prefer Kicks, Pilfers and Turnovers. The model has clearly make a choice to increase the capacity of Sharks team on Possesion and Runs.